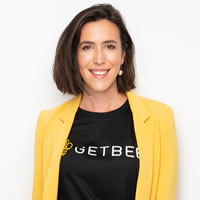 Thea Myrhvold is a globally recognized Founder and CEO of GetBee, a B2B knowledge-sharing platform designed to improve consumer shopping experiences and transform the future of work.

With a track record of accomplishment in technology and innovation for more than 10 years, she is known for strong leadership and communication skills with an innate ability to build and scale technology startups. As a fierce advocate for women and diversity in technology, Myrhvold is a strong believer that technology can be a force for good, for people and the planet.

Throughout her career, Thea Myrhvold, of both Arabic and Norwegian heritage, is an innovator, digitally transforming industries such as learning, wellness and retail. She taught herself how to code and build apps, leading her to a job coding for one the first EdTech game-based offering one of the world’s first game-based educational applications covering high school curriculum. This IOS app was the first of its kind and specialized in subjects, such as Economics for the International Baccalaureate. She later launched TeachMeNow.com, a global marketplace for learning, reaching thousands of tutors, experts, and teachers from around the world.

As part of her passion for “tech for good,” she has secured global partnerships for social impact in collaboration with Expo2020 Dubai. She also has negotiated deals with Microsoft to Expo2020 and One Million Arab Coders. One of her initiatives, ExpoLive, is an impact grant program facilitated by Expo2020, which funds novelty innovative solutions that impact society positively. Additionally, she is launching platforms for inspiring projects in LATAM, Middle East, Africa and beyond.

Thea Myrhvold has been quoted widely in the press, including Forbes, Bloomberg, SkyNews, The Financial Times, The BBC and Gulf News. Her impressive work has been recognized with numerous awards including being an Expo2020 Global Innovator, The Cartier Woman’s Awards, INC. Arabia’s Top Female Startups, Mercedes Benz Brand Ambassador and top 10 LinkedIn Power Profile all under the age of 30.