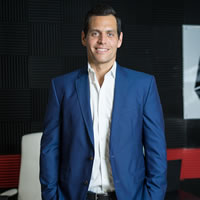 Steve Suarez is an entrepreneur with experience in conceptualizing, executing, and successfully sustaining growth in a broad range of disciplines. Steve’s driving philosophy has always been, and continues to be, providing vision and guidance, with a watchful eye on the bottom line. Early on, Steve identified that business is as much about when you get in, as it’s about what you get into. Deciding to open a title company during the South Florida real estate boom and selling to a law firm, before the downturn, inspired him to seek out other ripe opportunities.

Steve purchased and subsequently sold ElPolitico.com website to the Global News Network, just as the climate of online punditry exploded. He also capitalized on the functional fitness trend by co-founding a global fitness festival called Wodapalooza. Steve sold this property in 2017, after 7 years, and it is now a sanctioned CrossFit regional event.

After that sale, Steve chose to fuel his passion for creating audience experiences by launching BlackStage Productions. His firm specializes in all aspects of event ideation and execution during a time where brands are compelled to creatively connect with their intended audiences. BlackStage has built an impressive client roster that includes the NFL, Formula 1 Racing, Concacaf Soccer, The Miami Marathon, Ultra Music festival, and many others. In early 2018, inspired by the current traction of ESports, Steve invested in a stadium and competition in Chattanooga, TN, TenGig.

As a result of his conversations and connections he envisioned a new way to bring gaming to the growing number of enthusiasts around the world. His vision led him to create the Ultimate Gamer. The Ultimate Gamer’s inaugural tournament was held in Miami, in March of 2019 and has set the industry on its ear. Steve holds an MBA from the University of Florida.