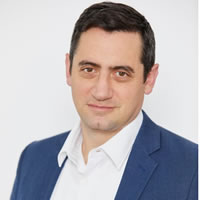 Dan Granger is Founder and CEO of Oxford Road, the leading independent audio agency in the U.S.

Through Dan Granger, Oxford Road has helped hundreds of DTC companies scale their efforts in audio using Podcast, Radio, Streaming, Connected Voice and more. By offering the combined capabilities of Media, Analytics, and Creative Development, Oxford Road guarantees superior performance for brands that qualify for their services. Oxford Road was named among Inc 500 Fastest Growing Private Companies and has supported the growth of over 12 Unicorn Companies (Private companies valued over $1Billion) to date.

Through Oxford Road, Dan Granger publishes weekly newsletter, The Influencer, and is host of The Media Roundtable, carried by PodcastOne. As a Founding Partner of The Media Roundtable, Dan Granger has been leading the way to mobilize marketers to promote truth and civility in ad-supported media. He is also the creator of Audiolytics™, a creative analytics process, proprietary to Oxford Road to drive maximum performance. His writing and thought leadership has been featured in such publications as USA Today, The Wall Street Journal, The Hill, Digiday, Business Insider, The Drum, Ad Week, and The New York Post.