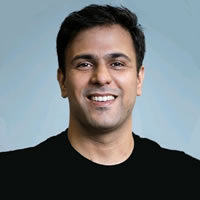 Ritukar is the founder and CEO of Ottonomy Inc where – in less than 10 months – he spearheaded the company’s establishment as the world’s first autonomous delivery robotics company to deliver F&B and retail items at airports in the United States.

Leading his team to achieve a number of monumental successes within the company’s first six months, Ottonomy Inc and their robots has earned achievements such as recognition as a 2021 Sustainability Product of the Year by the Business Intelligence Group (BIG) and being named the winner of the Summer Summit at Plug and Play Mobility Accelerator. Additionally, Ottonomy Inc received an Innovation Award from the Robotics Business Review as one of the top 50 most innovative companies of 2021 – being named amongst remarkable companies such as Waymo and Boston Dynamics.

Before founding Ottonomy, Inc., Ritukar brought 14 years of experience from his time in the autonomous driving and robotics space. With more than 40+ patents and research papers in robotics, autonomous driving, and Human Robot Interaction, he has led and contributed to projects including Unmanned Ground Vehicles, Warehousing Robotics, ADAS and most recently he led Aptiv’s effort for BMWs Urban Autopilot in 2019-2020.