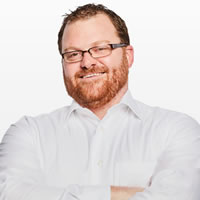 Jarrod Morgan is the Founder & Chief Strategy Officer of Meazure Learning, the parent company of ProctorU. Jarrod has been a leader in the education technology field for over 16 years and pioneered the online proctoring industry as the founder of ProctorU, now known as Meazure Learning. Jarrod is an inspiring entrepreneur, award-winning business leader, keynote speaker, and chief strategist for the world’s leading online testing company. Jarrod founded ProctorU in 2008, and in 2020 led the company through its merger and evolution into Meazure Learning.

In his role as chief strategy officer, he is a frequent speaker for the Online Learning Consortium (OLC), the Association of Test Publishers (ATP), Educause and many others. He has appeared on PBS and the Today Show, and has been covered by the Wall Street Journal, The New York Times, and is a columnist with Fast Company through their Executive Board program. He is passionate about helping people learn about education technology, entrepreneurship and corporate leadership. He studied computer science at the University of Florida, is a four-time Gator 100 winner, and was named one of 20 people to lead Birmingham for the next 20 years by BHM Biz Magazine.