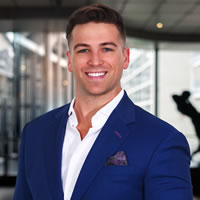 Jameson Emling is an accomplished sales leader and entrepreneur, with experience in a multitude of verticals in his tenured professional career. He is also Pillar Payments’ Managing Partner. His early experience as a Strategic Business Developer for a biotech startup, MedTech Detect, built an understanding of both capital fundraising as well as the compliances nuances of obtaining patents around the globe.

Over the course of five years, enough seed money was raised to employ a team of ten employees and hold two offices, while obtaining two patents in 84 countries. The technology was early detection of analytes of drugs and alcohol in the sweat of patients, for use both in the outpatient abuse programs as well as prison systems.  Ultimately the tech and IP were sold for use in early detection of diabetes in adolescents.

After the dissolution of MedTech, Jameson went on to start Chicago Dipped, a boutique automotive shop spearheading the growth of liquid automotive wraps in the greater Chicagoland area.  Once fully staffed, he became involved in enterprise-based sales in industrial plastics, covering the Midwest region.

Adjacent his civilian accomplishments, he’s serving his thirteenth year in the United States Marine Corps, currently serving as a central region Marine for Life rep.  As a Marine for Life rep, he serves as a liaison between transitioning Marines and the private sector, looking to find as many veterans employed as possible.

Most recently, Jameson exited his ownership in Chicago Dipped to serve as Managing Partner of both Pillar Payments, a credit card processing company, and TRG Consultants, a modern cost containment firm. He has focused his efforts on reducing the spend for businesses of all types and all sizes in response to global pandemic.

Maintaining employment as a sales executive, he lives by the motto “9-5 pays the bills, 6-10 builds the Empire.”  Pillar Payments, in its 4th year of existence, now facilitates over $1 Billion in transactions in all verticals – Cannabis, telemedicine, software, retail, and more.  The competitive advantage is gained via a proprietary and agnostic software for managing interchange, which is the raw cost of processing from Visa and Mastercard.  This has enabled over $7 Million in savings for Pillar’s clients, and it continues to grow.

TRG Consultants is poised to reduce costs on large P&L line items such as healthcare, by over $500MM in its first full calendar year of business.  The healthcare advantage utilizes direct contracting with surgeons, physicians, and medications manufacturers, cutting out large commissions from both Healthcare providers and Pharmacy Benefit Managers, in line with POTUS’s most recent healthcare transparency bills.