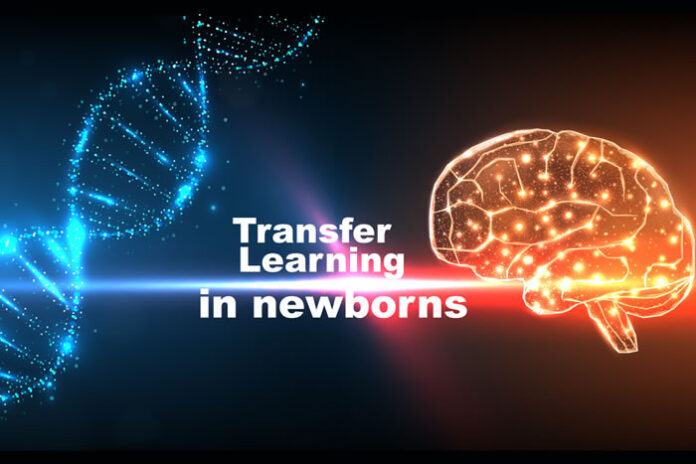 When a baby emerges from the womb, the baby’s brain already has all the learning essential for the correct functioning of the body.  The neural circuits for breathing, heartbeat, kicking, sleeping, blood circulation, etc., are all ready! The baby can track a moving object, orient towards Mom or Dad’s face, feed, or even has the desire to walk when you hold it up with feet touching a flat surface. Isn’t that interesting when our whole premise is learning based on “DATA”? Transfer learning in newborns is what we will explore here.

Let’s start from the beginning

So to explain to transfer learning in newborns, we must start with the zygote, a cell formed by the fusion of the male and female gamete (gametes are the male and female with only 23 chromosomes, unlike the regular cells with 46 chromosomes). After the fusion, the zygote has a complete set of 46 chromosomes.  In case you forgot, genes are segments of DNA, and chromosomes are the cells’ structures that contain the genes – hundreds to thousands of genes. So zygote contains the DNA – the complete DNA that defines us.  DNA is a fascinating multi-dimensional code ever known to humankind. It is not your typical software function.  It has the encoded instruction set for complete development.

From one cell, the zygote will soon become multicellular, as each cell will undergo mitosis. The cells divide, and the new cells have identical copies of the DNA as the original cells. The cells rearrange themselves spatially to form three layers that differentiate into different organ systems.  The cells multiply and change.  They produce cells that become white blood cells, red blood cells, nerve cells, eyes, liver, fingers, toes, hair, heart, skin, etc. A cell becomes a palm, an adjacent cell becomes a finger, and another becomes a nail.  Not only does a cell know what to do, but it also knows what neighboring cells should do. The DNA instruction set is controlling this. Thus the importance of transfer learning in newborns.

It may sound that learning is influenced only by parents and grandparents’ genomes, but it’s a lot more interesting. Along with the genome, we also have an epigenome.   The epigenome is a series of chemical tags (called epigenetics markers) that promote or repress the expression of genes without altering the genome. These epigenetic modifications are added in response to the physiological or environmental stimuli our cells receive. Diet, stress, habits, learning, exercise are a few examples that can permanently alter the epigenetic profile of an individual. Researchers use the term “imprinted genes” to refer to genes influenced by the epigenetic markers.  The DNA is not modified, but these epigenetic modifications influence the instruction code contained in the DNA.  A software layer on top of the DNA code. Essentially transfer learning in newborns.

“Your learnings, habits affect your epigenetics, and that is passed on to your offspring.”

Your learnings, karma, habits, environment, and lifestyle affect your epigenetics, and that it is also passed on to your offspring.  Blueprint of your brain is defined by your parents and ancestors.

Whew!  Default learning of a baby is not just coming from the parental genome but is also influenced by the parental epigenome.  A child has the same habits as the father! A child is as intelligent as the mother! All these sentences make sense biologically.   The genome or epigenome is taking part in that learning.  It is not just the kicking, grasping, crying, sleeping, rooting, and feeding; unconscious bias, aptitude, habits, and more learning are transferred from generation to generation.

“Are people responsible for the (unconscious) actions based on the learning/behaviors they are born with? That is a debate we can discuss another time.”

Let me ask you this. What is something that you know today but you never learned? What are the epigenetics markers in your body today that will influence your offspring or have already influenced your offspring? Have you ever made a list?

Regardless, this is very interesting for AI/ML engineers as brain development from the genome and epigenome offers a cue to mechanisms of transfer learning in newborns as well as storing the model.  Answers are in the nature; we just need to look closer.

The Robots are Coming!

What Benefits Will Quantum Computing and AI Provide Mankind?