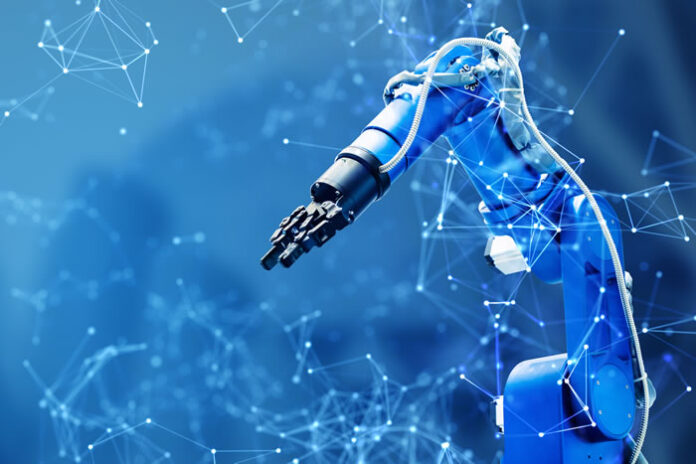 Artificial Intelligence (AI) is technology that empowers and leverages computers and other types of machines to imitate the human mind’s ability to solve problems and make decisions. However, contrary to the narrative of science fiction writers, the novelty and the utility of this type of technology is not its ability to “replace” humans–it is its ability to supercharge and scale human-like insight. This is how artificial intelligence transforms traditional manufacturing industries.

This can include everything from speech recognition to customer service to the ability to recognize and act on gathered information, and even to make recommendations based on trends and the synthesis of all types of disparate information.

AI in the fourth age

What AI is doing for businesses and society in the twenty-first century is akin to what the industrial revolution did in the eighteenth century. Before the advent of machines, all work had to be done by hand. This meant that progress was arduous and tedious, and it required manpower and constant time-on-task in order to accomplish anything. When Eli Whitney invented the cotton gin, suddenly the process of cleaning cotton lint was supercharged–what was once the work of hours and hours of labor could suddenly be done in minutes with minimal effort. Today, machines are an integral part of every industry to the point that without their utility, it would be impossible to meet the demands of the world’s economy.

Artificial intelligence transforms traditional manufacturing industries on the verge of a similar revolution, but in this case, it is not augmenting the limits of human hands, but rather the limits of human minds. In operations at scale, there are thousands of decisions that must be made every minute. This can mean everything from observing and acting on trends, making educated decisions about how to handle certain situations, and predicting or reacting to problems either before or as they arise.

Humans excel at this ability–it is what separates us from animals–but the fact is that humans in charge of making observations and generating insight and decisions are limited by their attention span, their bandwidth, and simply put, their humanity. Take a corrugated manufacturing facility for an example. Every day in a box plant, there are hundreds of thousands of data points being generated by machines; there are hundreds of synchronous operations taking place; and there are dozens of problems to be solved, such as when to perform maintenance on machines, how to organize processes, and what to do if something is not working correctly. With this constant stream of information to synthesize in a limited amount of time, it is impossible for one person or even a team of people to react optimally to all of these situations. So, prior to AI, the only course of action was to do the best they can do in their capacity.

The disruptive power of AI

But AI changed everything. Unlike a human, an AI platform, like Helios, which is the corrugated industry’s Machine Learning and Industrial Internet of Things (IIoT) platform, is tireless and not limited by attention span or bandwidth. So, while a human brain doesn’t have capacity or the processing power to pour over all of the data generated by the corrugated manufacturing machines, or to observe every anomaly that could indicate an impending breakdown, Helios does. Helios collects and analyzes every anomaly that takes place on the manufacturing floor, from an unusual noise or shudder to a jam in one of the machines, or even something as subtle as a slight dip in output rate that the human eye could easily miss.

With all of this information, Helios optimizes the facility’s operations, both by noticing otherwise imperceptible inefficiencies and by using its corpus of knowledge to schedule maintenance to machines in a way that extends their lifespans and prevents catastrophic failures and breakdowns before they even happen. With the reasoning and logic skills of a human brain and the tireless energy and attention to detail of a computer, the result is corrugated manufacturing plants that maximize their productivity and minimize their loss and downtime, ultimately leading to much higher profits and even a potential to grow and scale operations to new heights.

Corrugated manufacturing is just one example of a traditional manufacturing industry that can be supercharged by AI by uncoupling processes and insights from the bandwidth and attention span of the humans in charge. Nearly every vertical has inefficiencies that can be spotted and corrected, as well as voluminous data streams that can be synthesized and acted upon by AI, with the end goal of a more effective, more efficient operation. Some of the industries in the midst or on the cusp of AI revolutions include education, healthcare, agriculture, customer service, supply chain management, manufacturing, energy, information technology, and software development. Be on the lookout for now how artificial intelligence transforms traditional manufacturing industries.