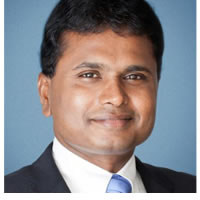 Tel Ganesan is the Founder and Executive Chairman of Kyyba, and is a self-made serial entrepreneur, engaging public speaker, philanthropist, mentor, film producer, and world traveler with a globally recognized reputation across multiple industries. He currently serves as Founder/CEO of multiple thriving enterprises, including Kyyba, Inc. – a Michigan-headquartered global IT company with over 700 employees and millions in annual revenue – Kyyba Films, Kyyba Wellness, Kyyba Innovations, Kyyba Fashions, and Kyyba Music. He stands as a fearless leader who has led his many businesses through the challenges of business for many a years from a recession years ago up until the pandemic now. Ganesan is an open book and eager to share tips to help guide others through the leadership challenges of today. Infectious enthusiasm and courageous determination power his drive to do what others are afraid to do as he blazes a trail for the next generation of entrepreneurs with a simple secret to success: do what makes you happy.

Ganesan earned a Mechanical Engineering degree from Wayne State University before getting his start at the Chrysler Corporation. Over 13 years, he earned multiple awards and promotions in manufacturing and product development. The desire to make a bigger impact and build something of his own then took Ganesan in the direction of entrepreneurship with the establishment of Kyyba, Inc.

Ganesan is fueled by a belief that entrepreneurs make the world a better place for everyone, founding TiECon Detroit – the largest entrepreneurial conference in Michigan modeled after TiECon Silicon Valley, largest entrepreneurial conference in the world along with the locally based Pitch Club and Fintech Challenge. He served as organization president and chairman of the TiECon Detroit Conference from 2009-2011 and again between 2016-2018. There, he played a key role in building a global collaborative network of over 1,000 entrepreneurs and professionals dedicated to the advancement/mentorship of Midwest region start-ups and entrepreneurs.

Ganesan is also a member of the Producers Guild of America, serving as Founder/CEO of Kyyba Films. Along with the distribution of feature-length movies such as The Marksman (2021), featuring Academy Award-nominated Actor Liam Neeson, he has produced multiple feature films, including the 2022 release 18 ½ – a top-rated 1970’s-era Watergate conspiracy thriller starring Willa Fitzgerald and John Magaro.

In 2022, Ganesan was appointed to the Ascension Providence Hospital Board of Trustees, connecting Kyyba Wellness with the Ascension Providence Foundation. His focus includes providing vital industry insight on innovative approaches to patient care and wellness, in addition to garnering essential community support. Ganesan’s extensive global resource network will contribute to the research and implementation of collaborative, enterprise-driven solutions through the Ascension Innovation Hub powered by Kyyba Innovations.

Over a 30-year career, Ganesan’s groundbreaking work has earned him consistent national recognition, including:

On any given weekday morning, Ganesan can be found in deep meditation and yoga poses before heading into his business ventures. He actively “levels up his comfort zone” with tennis, kayaking, and traveling to new places. After everything he has worked hard to achieve, Ganesan is still convinced that his biggest potential is yet to be realized, and he works hard daily to push the limits of what’s possible synonymous with the tagline of Kyyba, make impossible, possible.