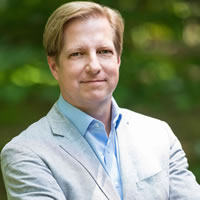 Richard Boyd is the CEO and Co-Founder of Tanjo AI. Richard is a tech entrepreneur and expert on AI, machine learning, virtual worlds, computer gaming and human/computer interfaces. The co-founder and CEO of artificial intelligence and machine learning company Tanjo Inc., and the co-founder and CEO of Ultisim Inc., a simulation learning company that utilizes gaming technology and AI.

Richard co-authored a best-selling industry-leading book on Virtual Reality Modeling Language (VRML) technologies, called The Virtus VRML Toolkit. Published by Hayden Books, the book has been distributed and translated into several languages since its publishing.

Richard is also a celebrated children’s book author and is a graduate of the University of North Carolina at Chapel Hill. He lives in Chapel Hill with his wife and two children.