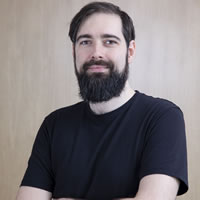 Pavol Rusnák is a co-founder, CTO and core developer of SatoshiLabs, where he is leading the development of software and hardware projects such as TREZOR, the first hardware wallet. Pavol is an open-source and cypherpunk enthusiast, that is also interested in artificial intelligence and cognitive science in general.

In his spare time, he is working on award-winning, hi-tech, experimental, new media interactive installations. He stands behind many security industry standards. He is well known to the world’s cryptocurrency community as one of the most influential visionaries and innovators.