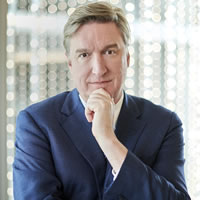 Byron Reese is the founder of several high-tech companies. He has obtained or has pending numerous patents in disciplines as varied as crowd sourcing, content creation, and psychographics. The websites he has launched, which cover the intersection of technology, business, science and history, have together received over a billion visitors. He is the author of “Stories, Dice, and Rocks That Think,” due out Aug. 16, 2022, “The Fourth Age: Smart Robots, Conscious Computers, and the Future of Humanity,” and “Infinite Progress: How Technology and the Internet Will End Ignorance, Disease, Hunger, Poverty, and War.”

Byron Reese is an Austin-based entrepreneur with a quarter-century of experience building and running technology companies. He is a recognized authority on AI and holds a number of technology patents. In addition, he is a futurist with a strong conviction that technology will help bring about a new golden age of humanity. He gives talks around the world about how technology is changing work, education, and culture. He is the author of four books on technology, his most recent was described by The New York Times as “entertaining and engaging.”

Bloomberg Businessweek credits Byron with having “quietly pioneered a new breed of media company.” The Financial Times of London reported that he “is typical of the new wave of internet entrepreneurs out to turn the economics of the media industry on its head.” Byron and his work have been featured in hundreds of news outlets, including New York Times, Washington Post, Entrepreneur Magazine, USA Today, Reader’s Digest, NPR, and the LA Times Magazine.