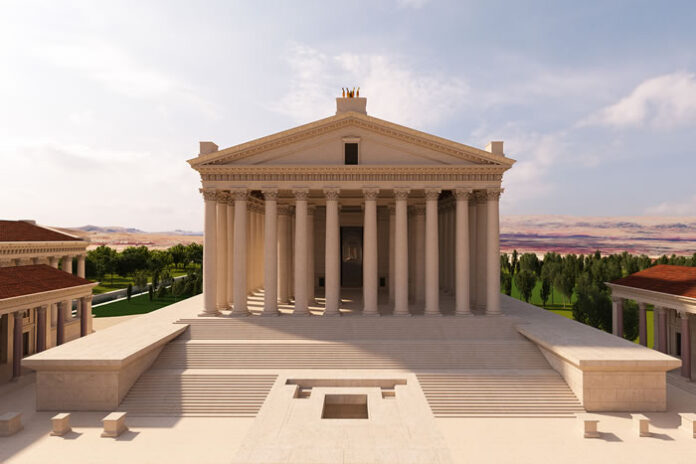 Bernie Frischer, a renowned digital archaeologist, and founder of Flyover Zone, along with the German Archeological Institute, one of oldest archaeological research institutions in the world, recently launched a virtual tourism experience and new app Baalbek Reborn. This app allows users to experience an ancient Roman site firsthand. Baalbek, located in Lebanon, is a UNESCO World Heritage Site featuring a collection of ancient Roman sites and monuments that date back thousands of years to 215 A.D.

The most unique aspect of Baalbek Reborn is that it allows users to take a virtual history tour and see not only what it looks like today, but also a digital recreation of the sites from the year 215. This is the forefront of archeological technology and allows people to visit ancient Baalbek and immerse themselves in the ancient Roman site.

In Baalbek Reborn virtual reality technology allows you to feel like you’re flying over the ancient city in Roman times, or strolling down the city’s streets. During the tour you get an 8k bird’s eye-view of 35 different sites in Baalbek and its temples. You can also listen to expert commentary at each stop to learn more. This would be ideal for anyone interested in ancient Roman history, from archeologists to young students.

Throughout history, modern people have dreamed what it might be like to walk through an ancient city firsthand, and this is their chance. You can explore an ancient Roman city and see what the streets were like when the area was at the peak of its ancient development. You can step into grand halls that have been in ruins for ages, and see majestic spaces that are still off-limits to visitors. It can help you come to see why Baalbek is considered one of the world’s top historic destinations, right up there with places like Pompeii, Machu Picchu, and Petra.

Even if you don’t have access to virtual reality equipment, you can still experience Baalbek Reborn on a number of platforms, including smartphones, desktop computers, and Oculus — all for free — thanks to the generosity of Bassam Alghanim. Alghanim, a passionate explorer, has sponsored “Baalbek Reborn” in honor of his loving parents, Yusuf and Ilham Alghanim, who used to take him to this special place when he was a child.

This virtual production is a collaboration between three leading expert partners: Flyover Zone Productions (which creates virtual tours of the world’s most amazing cultural heritage sites), the German Archaeological Institute (which provided the scientific oversight and content), and the Ministry of Culture – Directorate General of Antiquities, Lebanon (which is responsible for the protection, promotion, and excavation activities in the country’s national heritage sites).

Also, to give back to the people of Lebanon, Baalbek Reborn supports arcenciel, a Lebanese-based nonprofit which supports the country’s most underprivileged and marginalized communities. On August 4, 2020 a blast in Beirut disrupted the lives of thousands of people and destroyed the face of the city. Immediate actions were launched to save the last historical houses in the city and thousands of homes.

Baalbek Reborn features a direct link to make a donation to support the restoration efforts which include vocational training led by heritage experts, to rebuild Beirut’s lost traditional workmanship, to preserve the unique building’s craftsmanship and the centuries of history they withhold. Visit flyoverzone.org to learn more.

Why a Rear LiDAR Scanner on the New iPhone 12 is...