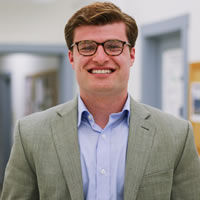 Jackson Fitzgerald is the co-founder of Hedge. Jackson was born and raised in Pittsburgh, Pennsylvania and is the youngest of eight kids–one older brother and six older sisters. He played a number of sports growing up and was always challenged to work hard on the sports field and in the classroom by his parents and older siblings.

After high school, Jackson went to study Statistics and Economics at Penn State. While in school, he held a number of leadership positions in his organizations (fraternity President, Interfraternity Council Vice President) and even found time to coach the Penn State Women’s Club Basketball team for three years. He was hands-on in helping reshape the structure of Penn State Greek Life, though primarily on the side of implementing social responsibility initiatives around anti-hazing initiatives and alcohol abuse safeguards.

After graduation, Jackson chose to put law school on hold in order to pursue a more-immediate curiosity; technology in the fantasy sports and sports gaming space. As a “semi-technical” co-founder of Hedge, he was always interested in how technology was incorporated into many financial technology applications, whether it was online banking, investment applications, or even savings applications. He became frustrated with the lack of innovation within the fantasy gaming space, and felt that users like him would only benefit from gaming innovation that the “Fintech” space continues to embrace.

Hedge is currently a remote company, with the unofficial “Hedgequarters” residing in Pittsburgh, PA. Jackson also sees how Pittsburgh is and can continue to be a hotbed for young, talented technology companies. He only hopes to add to the number of successful companies and entrepreneurs that can call Pittsburgh home.