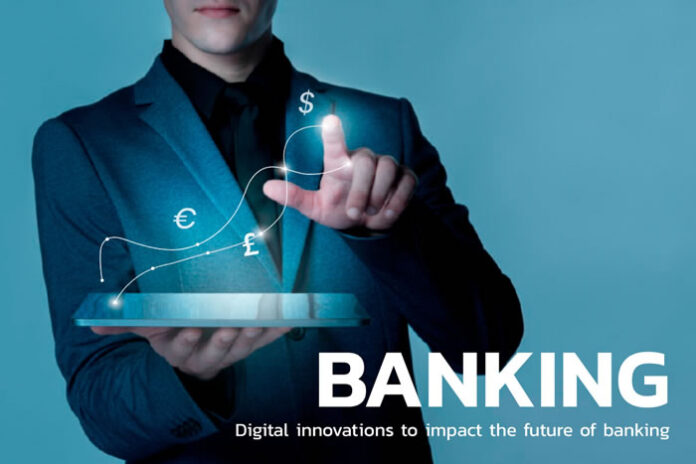 Digitalization is taking over the world. There is no business and no industry that isn’t looking more and more to digital and automation solutions as the next step in their development. It’s key to kick-start digital transformation in banking.

However, there is still one more industry that is showing more resistance to change than all others – the financial industry.

Indeed, the financial industry is one of the oldest and the most rigid industries today, with banks being the worst of the bunch. Many banks run on old, legacy systems that are so cumbersome and inefficient that they cause massive overheads for many institutions.

Yet, around 65% of Americans use some kind of digital banking, which speaks volumes for both its effectiveness and the rigidity of modern banking.

It is clear that the revolution is coming, but how should you go about it, and what are its key traits? Well, you can find out all about digital transformation in banking below.

As we said in the intro, banks love their legacy systems. We also said that the finance industry is one of the oldest industries, and by putting two and two together, we can establish a clear link between banks’ love of legacy systems and the age of the industry.

Indeed, some banks span hundreds of years in service, and some of the oldest banks in the world date back as far as the 15th and 16th centuries.

With that said, it’s no wonder that banks love to cling to the old. Even the youngest of banks have dozens of years of experience and branding, and, so far, they’ve been successful in their endeavors. So, why fix something that isn’t broken?

Well, the thing is, due to their outdated systems, banks suffer a very large amount of data breaches, causing the leak of almost 154 million records in the period of 2018 to 2022, with almost half of those leaks being caused by hacking.

In an industry that handles a lot of personal data for a lot of people, data security is paramount, and with digitalization, the old legacy systems will be replaced by newer, faster, more efficient, and, most importantly, more secure systems that will bring about a new age of banking. It’s imperative to implement digital transformation in banking.

One of the biggest gripes of old-school banking is its reliance on silos. One of the key traits of digital banking is the breaking down of siloed banking systems, and opening those systems so that they’re more accessible for third-party systems.

This is even more relevant, considering a lot of millennials are already in the workforce, and a good number of Gen Z-ers are joining too. All those young people are very comfortable with using their devices, and are no strangers to the internet, so they demand that their banking be moved to the digital world as well.

On that note, this is, actually, a very fortunate turn of events for the already established names in the financial industry. Banks sport around 75% retention rates, meaning people, once they’ve found a bank, tend to stick with it.

By using this to their advantage, banks can introduce open banking to a vast and loyal customer base, and have them become brand ambassadors for new customers by offering exceptional customer satisfaction.

One of the biggest changes from traditional banking to digital banking is moving from brick-and-mortar solutions to digital ones.

It is an already widely-established fact that banks prefer their branches to be brick-and-mortar locations. However, this also requires said banks to hire and train an incredibly large workforce.

Combined with deep and rigid protocols for handling money and financial data, this bloated workforce can create a bureaucratic maze that can be excessively hard to navigate.

With digital banking, the need for physical locations and vast teams is eliminated, and your bank can process client requests faster and more efficiently while also eliminating the need to hire and train thousands of employees and hundreds of teams.

Speaking of employees, digital banking also brings with it a whole host of younger, fresher, and better talent.

As we said, millennials and zoomers are slowly entering the workforce, and, being very comfortable with the digital, they can be excellent additions to your brand, and its new way of conducting business.

By hiring this new talent, you’re breathing a new life into your business, as younger people have a much higher propensity for innovation, and, on top of that, they’ll have already been trained in the digital solutions you’re about to introduce.

One of the biggest gripes most people have with the traditional banking systems is their rigidity and slowness. How many times has each and every one of us been frustrated because our bank needs 5-7 business days to process a payment?

With digital banking, the processing of requests is a lot faster, thanks to the new automation solutions that are a part of digitalization. Those 5-7 business days become 3 days, period, which is a great jump in efficiency and, ultimately, customer satisfaction.

When it comes to agility, digital solutions offer a great opportunity for expanding one’s business, and adapting to new changes and new technologies.

Banks that have embraced the digital scale much faster and much more easily, making them serious competition for even the most established old times in the industry.

How To Start a Digital Transformation

So, now that we know what some of the key traits of digital transformation are, how do we obtain them? What are the steps we need to take to create an effective digital banking solution for our customers?

When we think about digitalization, we often focus on technology. Technology offers us a lot of benefits, but, without directions, we’re just throwing technology at the problem, hoping something will stick, and we end up with cumbersome systems not unlike the traditional legacy systems we’re trying to replace.

After defining our mission, it’s best to start small. Choose one process, introduce new ideas and new technology, then track how it performs.

You might need to tweak things and work out the kinks, and it’s better to do that in one process before making sweeping reforms, as it will be much easier to handle than trying to work out several different ones, and trying to integrate them with each other on top of that.

Business logic is a set of rules upon which a process will operate.

Defining the business logic is a crucial step in establishing an efficient, working, automated process. By establishing clear rules, you can also take precise measurements and define future projections for the system.

After defining the logic, you also need to think about how that process now integrates into the rest of your system.

No process can, or should, exist in a vacuum, and each process should help create a system that’s bigger than the sum of its parts. By defining how your process operates on its own and within the system, you can then move on to the next step.

Decide on the Right Technology

Which is deciding on the right technology for the given process.

As we said earlier, digitalization is big on automated processes and AI, and one of the best candidates for the introduction of such technology is the blockchain.

As an immutable, decentralized ledger handled by intelligent digital agents, the blockchain already offers a very strong solution to the problem of digitizing and automating processes within a financial system. Thus the importance of digital transformation in banking.

On top of that, as any top blockchain development company will tell you, the blockchain is an incredibly safe way of storing data, as each block is its own separate “strongbox”, and, owing to its fragmentary and decentralized nature, it is virtually immune to “51% attacks” – attacks in which a hacker that manages to gain 51% control over a network can control the entire network.

Furthermore, the blockchain has already proven itself to be a good platform for financial pursuits.

In the end, the digital transformation of a banking system is a slow and deliberate process.

However, we believe that there are enough benefits and plenty of already-existing technology to warrant already-established making the transition that will make banking as a whole a lot more efficient in the future. It’s time to kick-start digital transformation in banking.

What Are the Benefits of Using a Delivery Driver App?