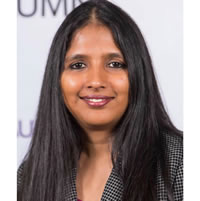 Shohini Ghose is a Quantum Physicist and professor at Wilfrid Laurier University.

Shohini Ghose wanted to be an explorer like Rakesh Sharma, the first Indian to go to space. She hasn’t made it to space yet, but she did become an explorer of the quantum world as a physics Professor at Wilfrid Laurier University, Canada. She examines how quantum physics can transform computing and communication. She and her colleagues were the first to observe a connection between quantum physics and chaos theory. Her recent article on quantum computing was featured in the Harvard Business Review’s Year in Tech 2022. Shohini aims to create an inclusive scientific community in Canada as the Director of the Laurier Centre for Women in Science (WinS) and as the NSERC Chair for Women in Science and Engineering in Ontario.

She holds a TED Senior Fellowship and her TED talks and other online videos have received over 5 million views. In 2017, she was selected to the College of the Royal Society of Canada. In 2019, she was among 25 women scientists worldwide featured in a UNESCO exhibit in Paris, and she is a member of the Scientific Board of the UNESCO International Basic Science Program. She still dreams of going to space.