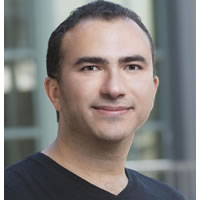 Hussein Ahmed is the Founder and CEO of Oxygen (oxygen.us), a modern financial platform designed for the 21st century economy – offering both personal and business accounts for digital-natives looking for a banking partner that understands how they live and work. As CEO, he oversees engineering and product in addition to guiding the company’s overall vision and strategic business direction.

Prior to Founder and CEO of Oxygen, Ahmed co-founded and served as Chief Executive Officer of collaborative software company Transpose Technologies. A serial entrepreneur and technologist, he has started successful businesses, raised millions in venture capital and built and managed large cross-functional teams in engineering, marketing and data analytics, including as lead engineer of the Amazon Kindle and as head of engineering at VTLS Inc., a global library automation software company that was later acquired by Innovative Interfaces. During this time spanning more than 15 years, Ahmed also consulted and advised companies on product design, go-to market launches and product marketing strategy. It was this experience as a freelance consultant that helped develop the idea that would become Oxygen.

A recognized thought leader, he has published several research papers on distributed systems and large-scale computing, further publishing a book on the former, and has written on diverse subjects spanning business, computing and financial technology for top publications including Forbes, IEEE, ACM, and VentureBeat.

Ahmed received his MBA from the University of California, Berkeley Haas School of Business and holds a PhD in Computer Science and Applications from Virginia Tech.