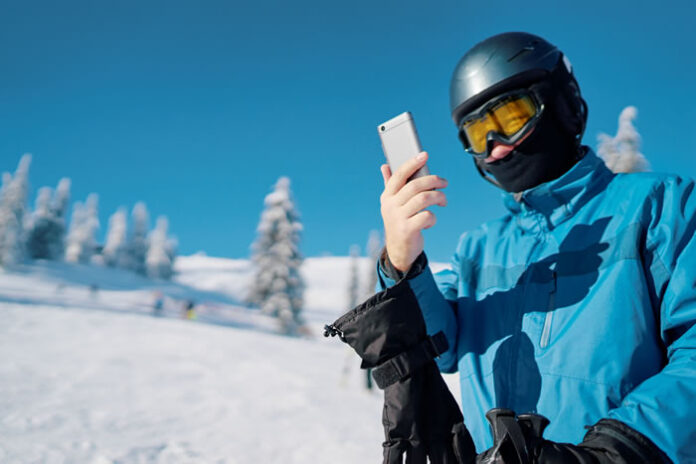 “If you see me lying in the road, please pause my Garmin/Strava!” This sentiment only half-jokingly reflects the impact of measurement apps and devices fueled by social media in the world of connected fitness and sports at large.

For those who take their wellness and sports seriously, over the past few years tech has transformed how we move—and more importantly how we measure our activity—from running to cycling, golfing, skiing, and more. Embraced by early adopters and often dismissed by sports purists, quantified alpine sports are indeed here to stay, and skiers are finally capitalizing on an elevated digital experience they so deserve.

Below are some key takeaways when leveraging ski tracking apps, for those looking to utilize data to level up on their performance.

Skiing is an individual activity. Unlike team sports where there’s always someone who can observe your form or endurance, one can rarely gather accurate and immediate feedback on recreational skiing. A great day on snow may manifest itself later with a burn in your quads, but how exactly do you define an “intense day”?

Instead of relying on feelings alone, skiers are turning to the latest apps to gauge their progress. Time is typically the first measurement that comes to mind: “I’ve been skiing all day!”—but is not a highly effective factor as it doesn’t account for lines and lifts, or any measured physical exertion.

Analyzing time spent skiing, total daily distance, and vertical together on the other hand are far more valuable. Collectively, they can demonstrate how hard you’ve truly pushed yourself. Daily vertical can also serve as a rough indicator of when you’ve had enough and should realistically call it quits for the day. Almost all ski tracking apps available today provide these basic metrics.

When questioned on performance, it’s common to hear skiers remark, “I’m a solid skier…I ski black diamonds.” While one might get down on a black run, that isn’t necessarily synonymous with skiing it well. Using the color designation to indicate piste difficulty and technique is ultimately a losing proposition.

When looking at the world of global ski, there is also no universal standardization to follow. Blues in the Alps may translate to Greens on U.S. slopes, Black Diamonds are Reds in Europe, and Double Black Diamonds are yellow. Long story short, your biggest feat by color designation doesn’t tell anyone much about your true ski abilities.

Now, advanced wearable technology can even more accurately evaluate ski technique and endurance level regardless of your run. Wearable sensors can assess body position much like an apple watch can assess a golf swing. That said, if you only have access to your smartphone, find an app that can apply a speed color gradient overlay and indicate pauses on your GPS track. Frequent stops in the context of slope pitch may suggest that there’s room for improvement of your technique (or you’ve been snapping too many pictures!).

While working on your technique, it’s important to focus on just a couple of areas at once. Most of us realize by now that multitasking never quite produces the results we’re aiming for.

MIT neuroscientist Earl Miller notes that our brains are “not wired to multitask well…when people think they’re multitasking, they’re actually just switching from one task to another very rapidly. And every time they do, there’s a cognitive cost.”

This concept applies to physical activities as well. Internalize a particular movement pattern or body position, then move on to the next one after you believe you’ve made measurable progress.

This is perhaps the easiest and yet significantly underestimated “hack” for improving ski technique. In physics, the observer effect means you change the observed system by the very act of observation.

Merely knowing that you’re being monitored makes human beings try harder. We’ll pay more attention to keeping our bodies more forward, knees bent, and arms in the front. It is hard to trick your brain with the apps alone, but a new generation of ski wearables and your trusty old GoPro can help with that. Try a wide-angle view on your GoPro attached to your helmet with a lens positioned downwards. Or ask friends to record you, knowing you’ll be tagged on social media.

Technology in the form of apps and wearables is often used to claim bragging rights on social media and enables everyday athletes to challenge and compete with one another. The same mechanism viewed through the lens of self-improvement can be useful for becoming a better skier.