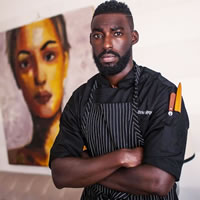 Chef Eric Adjepong is the co-founder of Pinch & Plate alongside wife and decorator, Janell Adjepong. He was a finalist on Season 16 of Bravo’s Top Chef, where he earned consistent acclaim from judges and popularity among viewers.

As a first-generation Ghanaian-American born and raised in New York City, Eric sources the flavors and influences in his cooking from many of the West African dishes he grew up eating. He is passionate about introducing diners to West African cuisine and the impact its diaspora has had on South American, Latin American, Caribbean, and American food, all in his elegant, artfully plated style.