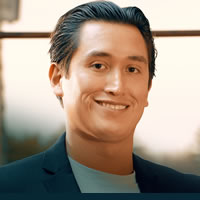 Sean Austin is Co-Founder, CEO and the mastermind and driving force behind Helios.

From leading the strategic mission and business development, to rolling up his sleeves for the hands-on work of daily operations, Sean is invested in elevating the future of voice technology through tone.

Over 15 years ago, when Sean heard about “brain scientist,” Dr. Schalk, at his alma mater of Rensselaer Polytechnic Institute, it was his vision to merge the charisma of a product visionary with the scientific mastery of a modern (bench-pressing) Wozniak. It all started at 19 years old when Sean founded his own audio biometric analysis company, advised by Dr. Schalk.

Through his 20’s, Sean meticulously paved the path towards Helios’ creation. He joined another audio startup that would be Spotify’s first acquisition, Tunigo, in 2013. At Spotify, Sean created the world’s most influential streaming playlist with more than 30 million subscribers. After 3 years leading Spotify’s global audio team to dominance, Sean worked in product at Fueled where he led teams to build products for startups and multi-billion dollar enterprises alike – RiteAid’s application being the largest. In search of harder tech and machine learning at-scale, Sean moved to Stockholm in a core ML product role with unicorn Klarna.

Upon returning to New York, Sean became Chief Product Officer at startup aptihealth. Since Day one, Sean led every piece of product and grew the company to over $100 million in enterprise value. The firm has raised more than $70 million to date in Series B, and more importantly, aptihealth has changed thousands of lives and revolutionized behavioral health.

These transformative audio and big data product experiences paired with Sean’s entrepreneurial drive have equipped him with the prowess to lead Helios into the future. With Sean at the helm, Helios is on a mission to unleash a new set of technologies that provide a more intimate connection between humans and machines.