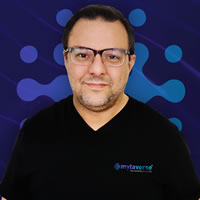 Jaime Lopez is the Co-Founder and CTO for Mytaverse. Jaime was born and raised in Bogota, Colombia, attended the University of Arizona attaining a B.S. in Physics. He then attended Stanford University for a Masters in Electrical Engineering with a concentration in Lasers and Photonics. Jaime then moved to Buenos Aires, Argentina where he worked as a laser engineer for several manufacturing companies, focusing on the maintenance and sales of laser products.

In 2003 Jaime migrated to Toronto, Canada where he was exposed to the live shows and entertainment industry which sparked his entrepreneurial mindset. Jaime went on to develop a Media Server application called Brash that allowed media control and automation on live shows. This product won several awards and accolades, and was widely used for internationally renowned artists such as Andrea Bocelli, Tiesto, Paul Van Dyk, David Guetta, Green Day, Eros Ramazzotti, Madonna, among many others.

Due to Jaime’s previous connection to the concert touring industry, LPX Digital developed content for artists such as Prince, Chris Brown, Kiss, The Band Perry, Carly Rae Jepsen, Roberto Carlos, and many other local and international artists. In January 2020 LPX received an investment led by Kenneth Landau to expand LPX capabilities worldwide. Due to COVID, Jaime pivoted into the creation of GathR Virtual Studios in April 2020, which has focused on the development of Mytaverse, a 3D immersive multiplayer experience for business and network interact.