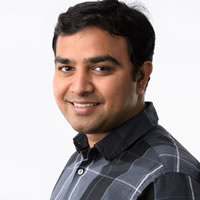 Ashish Kakran, is a Principal at Thomvest Ventures. Ashish has always been passionate about technology. Prior to joining Thomvest, Ashish supported founders in the cloud infrastructure space at Engineering Capital with product inputs, follow-on financing, and customer introductions through a CIO Forum he built from scratch. His journey in venture capital started with internships at BGV and Canaan Partners.

Ashish’s past experience includes spending over 3 years at AppNeta, a Bain Capital-backed startup where he managed TraceView, a distributed-transaction-tracing product that was acquired by SolarWinds in 2016. He also founded TwtPulse and was a founding engineer at eJonesPulse, which used prediction market mechanics for sentiment analysis for customers like the Federal Reserve Bank of San Francisco. Having been a part of startups, ones that were successful and ones that were not, he has developed an eye for finding the combinations of problems, teams, and cultures that help companies be successful.

Outside of work, he enjoys building and nurturing communities, and often bring people together with fun picnics and small lunches/dinners for thought-provoking conversations. At EVCA, a 500+ member community of pre-Partner VCs, he has led the Enterprise Infrastructure vertical while also serving as the President of the IIT Guwahati Bay Area Alumni group and member of the Executive Committee for PanIIT USA. Ashish has a BS in Computer Science from IIT (Indian Institute of Technology) and an MBA from the Kellogg School of Management at Northwestern University.